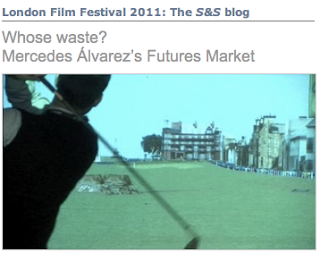 Sophie Mayer, 17 October
It’s a decade since Agnès Varda’s The Gleaners and I brought the mysteries and beauties of waste to the screen, exploring its relation to consumerism and visual art; in the intervening years, documentaries such as Lucy Walker’sWaste Land have focused on the marginal urban spaces of waste disposal, and the marginal, resistant lives that take place there.
Mercedes Álvarez’s 2011 documentary Futures Market follows Varda into the tumbledown flea markets of contemporary Europe. Coupled with its extended focus on Jésus, a junk dealer who refuses to sell his wares, are several strands of observational documentary filmed around the stock market, at corporate motivational conferences and at property fairs, drawing attention to the invisible architects of the postmodern economy at the moment before it crashed, and drawing connections between what is discarded and devalued and the inflation of false values and dreams.
The property fairs are particularly fascinating, not least because their elaborate, life-size promotional photographic backdrops, CGI projections and light-up architectural models implicitly indict mainstream cinema, which similarly uses CGI, backdrops and models as part of the dream factory that sells futures to unwary customers. As Álvarez pointed out in Sunday’s Q&A, these infinitely-replicable models, and the succession of identical corporate spaces in which the fairs and conferences are held, are all we really see of ‘the city’, and render irrelevant the question of which city.
Interrupting these homogenised spaces are three that are more individual: Jésus’ warehouse; a small patch of allotments sandwiched between AVE railtracks and a motorway tunnel, whose vivid green comes as a huge relief to the viewer’s eye; and a baroque apartment which is disassembled at the start of the film.

In contrast to the blankness of postmodern corporate architecture, Álvarez documents the exquisite man-made detail of Renaissance painting and the hand-crafted household objects found in the apartment. While Varda’s film meditates on the ravages of time, Álvarez’s voice-over uses these talismanic objects to excavate the forgotten art of mnemonics, describing Simonides of Ceos’s development of the spatial arrangement of information that allowed him to bear witness to disaster. Jésus, with his infallible memory for the location, use and history of each object in his warehouse, is a living emblem of the dying art whereby classical and medieval scholars made mental arrangement of arguments or whole branches of knowledge, laying items out along a pathway or mentally furnishing the rooms of a house.
The projected, plasticky condos and hotels enticing buyers to Dubai and other dubious locations asks whether the future we imagine is a public space evacuated of memories – or whether Jésus’s chaotic but intimately inventoried warehouse, alive with cats, could offer us fragments to shore against our new ruins.